The final extremity, or a history of marriage with this man.

We’d only been married a few months when my husband showed up at our door cradling a sublexed shoulder.  Covered in dirt with leaves in his hair.  I don’t remember the details.  I’m sure it was a great story.  He had injured it while running the infamous Tallulah Gorge.  After bravely telling his kayak party to “go ahead without me, I’ll be fine,” he climbed out of the gorge carrying his boat and painfully made his way home.  The next day, we welcomed Dr. Baumgarten into the family.

Famous last words, “just one more tree.”  Scott and I had taken 10 teenagers deep into the woods to work on a project.  We were building a prayer glade meant for seclusion and beauty.  We had transported all the kids to this spot via a tractor-pulled hay cart.  The manly men of our party–two college students and Scott–were “clearing the view” (i.e. chainsawing all the poor trees in their path) on a ridiculously steep incline.  The injury was, well, let’s just say it was gruesome.  A very bumpy hay-ride, ambulance transport, and a terrible introduction to NY public hospitals = icing on the cake.

Yes, that is my hubs in the middle.  The one brandishing the chainsaw.  And yes, the pic to the left was taken just before the drama.  The Prayer Rim project turned out nicely, though.  We can truly say it was built with blood, sweat, and tears.  The tears were mine (and Josh Finch’s). 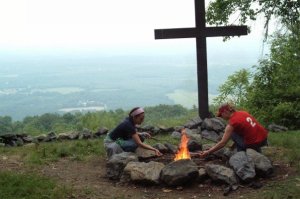 A slip on ice while hiking results in a broken leg–not the clean break kind, of course; the spiral break kind.  The kind that requires surgeries and pins.  Mr. if-its-gonna-happen-it-will-happen-in-the-middle-of-nowhere had to hike out of the wilderness by pulling himself along the ground.  Even crossing a river.  Why hello, again, Dr. Baumgarten.  Really, it has been too long.

Kayak + big rock = broken face and another sublexed shoulder.  He’s scheduled for surgery tomorrow.  Should I bring cookies for our friend, Dr. B?