When you pass through the waters

I’m reading Michel Odent’s book, Water and Sexuality.  If you aren’t familiar with Odent, he is a French surgeon who began to explore birth as a midwife.  He noticed women were drawn to and influenced by water during birth.  You don’t need to be around birth long before you notice that phenomenon.

He is also incredibly provocative.

In terms of waterbirth, he describes how women are drawn to the water and will sometimes enter the tub before it is barely filled.  In Odent’s observations, the presence of water “releases the brakes” on birth; inhibitions melt and the neo-cortex turns off.

I started thinking about a question I ask all my clients:  If you could birth your baby anywhere in the world, without worrying about logistics or safety, where would your fantasy birth take place?

I knew many women included water in their answer but I decided to find out how many.  I pulled my last 50 client files and went through each one of them.

38 out of 50 said they wanted to birth either in water or near water.

Some of the answers were creative and specific.  Here are a few:

Three women mentioned dolphins and four mentioned mangoes.  Is there some symbolism in those images?

My favorite was a woman who would birth at a coral reef at night.  Probably the scariest place I could imagine but for her it was a peaceful, safe haven.

Only 12 did not involve water.  So what did those 12 answer?

I don’t have a big revelation in these numbers.  I’m not surprised by them.  Personally, it’s difficult for me to imagine having a “land birth.”  At my first birth, when the midwife said the tub was ready, I stripped my clothes off in a room full of people and almost dove headfirst into the aquadoula.  The tub created a boundary around me, it gave a physical space that was mine.

Not everyone wants to immerse in water, certainly.  Still, ocean sounds, waterfalls, and thunderstorms resonate in many of these fantasy births.  We grow our babies in water, we dream vividly of it in pregnancy, and it may release the brakes in our births. 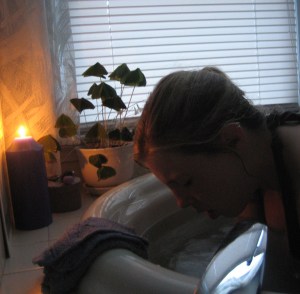