We went to share life with the my sister and her family. So let me talk about where/how they live.

They live in a third floor apartment at the end of a dirt road. The apartment is spacious and has a wrap-around balcony with a great view. Two bedrooms are air-conditioned. The rest of the apartment is hot, hot, hot! The kitchen is insanely hot. 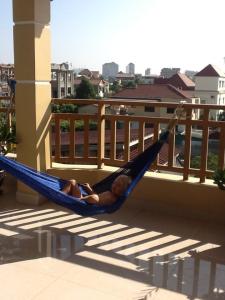 All the doors and windows have bars because from time to time someone wanders up. Thievery can happen even with bars and we were told not to leave anything sitting out that could be pulled through the bars. One afternoon, we returned home to find we were locked out. So we slid Norah through the 5 inch space between the bars, coached her to climb on the refrigerator to get the keys, and unlock her very first padlock! She called herself superhero the rest of the day. 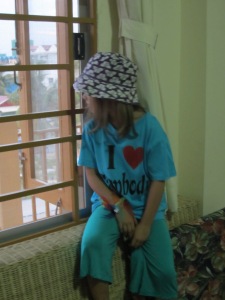 Yep, she really did fit through that window!

Noelle wages a constant war against ants. Upon arrival, we were taught proper protocol for food and crumbs. Namely, food scraps go into a bag in the freezer to await trash day and NOT in the trash can. Crumbs must be immediately swept up. We had to stay one step ahead of those watchful creatures. Here is a picture of the one set of shelves that is ant-proof. See the bowls that the shelf legs sit in? Noelle carefully organizes the packed shelves a few times a day.

The lizards were less of a threat but we were instructed to close cereal bags tightly and check the toaster before using it. Noelle’s had a few reptilian surprises. The girls, however, loved seeing geckos run about the house. The doors and screens were kept closed because of mosquitos.

They have a washing machine. The laundry is hung on the balcony to dry. Sometimes the wind blows too strongly and the laundry flies away. Sometimes they never find their lost items. Of course, shoes are not worn inside Asian homes. As a result, my feet always felt dirty and I was constantly washing them. Random cuteness:

They have riverfront property. In their backyard, flows the Smelly River. Mmmm-hmmm. And we knew precisely which way the wind blew from the smell. The smelly river is coated with a film of some sort and the banks are littered with trash. Everywhere fires burned, smelling pretty toxic. I’m pretty sure some sort of large reptilian monster lives in it.

Noelle and I took the kids on an evening walk along the river armed with rocks to throw at aggressive dogs. We got caught in the dark and I admit the rustlings in the grass and the shadows of rats were creepy.

They have a part-time househelper who is precious. She has the kindest smile and softest voice. And she cuts their fruit and meats into to tiny bite-sized pieces. I loved that part! She helps Noelle with the market shopping, food prep, and cleaning. In Cambodia, it would be offensive for a westerner to live there without employing a local. I enjoyed listening to Noelle and her househelper speak Khmer. I was shocked that the househelper wore sweaters and socks in the heat. We visited during their cool season. “Cool season” even though we were baking. And swimming in pools. Noelle says that her househelper is often surprised at foreign practices like putting children to sleep in separate rooms from their parents.

A few doors down from their apartment is a “training center” that is well-known for the trafficking of young girls. This exact facility has even been featured by a prominent American news syndicate. It is pretty clear from the bold sign out front that they are all about overseas bond labor. The owner is well-connected to a government official. It was heart-breaking to watch from Noelle’s balcony as girls arrived or departed with suitcase in hand.

And to be blunt, prostitution is so very visual. Sure it isn’t called prostitution. It has milder names like massage parlour, beer garden, karaoke bar, nightclub. But the truth of it is that a foreigner can order a child be delivered to his hotel room like he might order a pizza. It isn’t even all that expensive. Also because of a belief that sex with a virgin has special healing powers, the younger the child, the better.

So yeah, it got to me. And I was only there a little while. I knew I was going home. Noelle and Zach live there. They are raising their son there. It is their home. They have already had confrontations. When Noelle lived there before, human trafficking recovery was all she did. She saw police raping victims brought into the jail, she saw children re-trafficked, and she saw infants. Infants.

How? How do you muster the joy? How do you not turn tail? The evil is so huge, the statistics are too big, the corruption is massive.

So lest I give the impression that they live it up with their househelper who cuts fruits in bite-size pieces and their two air-conditioned rooms, let me be clear: they are doing some serious superhero work.

And they cling to every grace. They fast regularly, triple-check their every move, and keep accountability strong within their team. They crave our prayers because they know –know with a capital KNOW–how essential prayer is to their daily functioning.

They know –know with a capital KNOW–when they are not covered by it.

Noelle and Zach are about being good neighbors–loving people and pointing out grace where they see it. They sacrifice so much to do this work. Family, paychecks, friends, holidays, health-care, native language, car, home equity, nest egg, central air, snow, critter-free homes, reliable mail delivery/trash pick-up, and so much more. Why would anyone choose to do this job?

So please remember them from time to time. And maybe say a few prayers for them.  Maybe even support them with your dollars or send a care package.